Who was your oboe teacher’s teacher??

The classical music world is quite small and frankly hard to break into, this may even be exaggerated in the oboe world. A possible reason is the high cost of entry to study the instrument, mysterious nature of how this instrument even functions, the difficulty of reed making or a plethora of other reasons. Whatever the reason, opportunities are limited and competitive so the exclusion of diverse students and players has been compounded over time.

A narrow field and some folklore

By the turn of the 20th century the French school of oboe playing was very well developed; the students of George Gillet were well known for their lyrical playing and dazzling technique. His students included AMR Barret, Georges Longy (who played Principal oboe in the Boston Symphony and founded the longy school of music) and most importantly for the American tradition- Marcel Tabetau.

When Tabetau was hired  to play for the New York Philharmonic he was already a famous soloist and eager to escape the violence that enveloped Europe at the beginning of the 20th century. He was later called on to play for many touring groups and the Philadelphia Orchestra. He was also called on by the conductors of the burgeoning American City orchestras for recommendations to fill principal oboe positions. This is how his students came to dominate the orchestral domain of oboe playing and his legacy became the predominant school of playing in the USA.

I was curious as to how circular the oboe world actually is and decided to investigate from an educational perspective. The following is a list of 20 major music schools in the United States with the oboe professor listed followed by a semicolon and thier principal teachers.  So many of the previous generations principals oboists went to highschool at Interlochen and studied with Dan Stolper so I have excluded those just to make the research easier, but a fun game can be to hit control F (Comand F on Mac) and type in a prolific teacher like John Mack or Robert Bloom to see just how many of the top oboe educators share teachers, institutions, or even trajectory Iies. Please let me know if you studied with any of these famous teachers and who your contemporary colleagues where to continue the research. I would love to make an interactive oboe family tree one day. These are by no means the only powerhouses of oboe talent, just the ones I had time to put together, if you have more that you feel should be included please add them in the comments below! 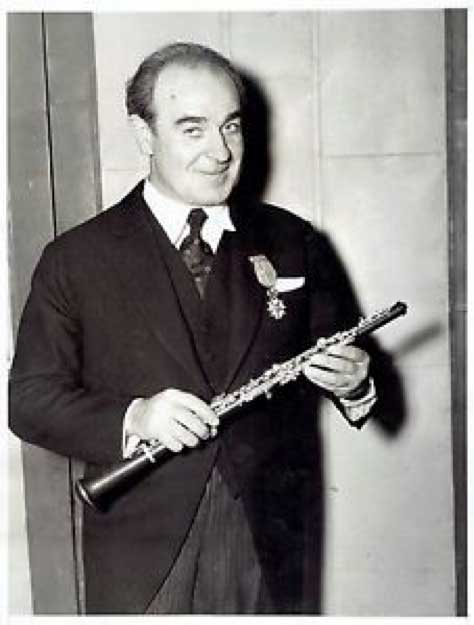 Who is who in modern oboe conservatory and schools of music

Laila Storch describes a time between 1930-1950 when career oboists where not coming out of the underdeveloped music schools at state universities and the only hope a young student had of a professional career as an oboist was to study at Juilliard, Eastman, or Curtis. Luckily many music schools across the USA now have great music programs and wonderful oboe teachers whose legacy may be traced to one of these schools. The following is a non-comprehensive list of influential teachers iT is interesting to see their teachers and how they relate to each other. Many names come up repeatedly. Try using ctl+f to search for names like John Mack or Robert Bloom. (The school is followed by the teachers name; their primary teachers)

Elaine Douvas is the most famous of the professors at Juilliard which is arguably the American music school most present in the American popular subconscious. Pedro Diaz and Nathan Hughes both studied at Juliard with Elaine so it may be true that this is a unique fork in the American tradition of oboe playing as many of their students now play in many of the nations symphony orchestras.

Richard Woodhams is the third generation of teachers at Curtis which has been a flagship school for the American Classical oboe tradition beginning with the grand-daddy himself: Marcel Tabeteau who was succeeded by John Delancie and the recently unrenewed Richard Woodhams. Katherine Needleman and Philip Tondre have recently been appointed to teach the next generation of Curtis oboe students. Considering how many of Woodham’s students have develop oboe related trauma from their time there, the oboe community welcomes the change of guard. Kathrine Neeleman’s education was with Richard Woodhams so is the fourth generation of Tabeateu’s departure from the short scrape style of oboe playing popular in Europe today while Philip Tondre’s teachers were Maurice Bourge, David Walter, and Heinz Holliger so in a way paves a way of reunification of European and North American oboe education styles. 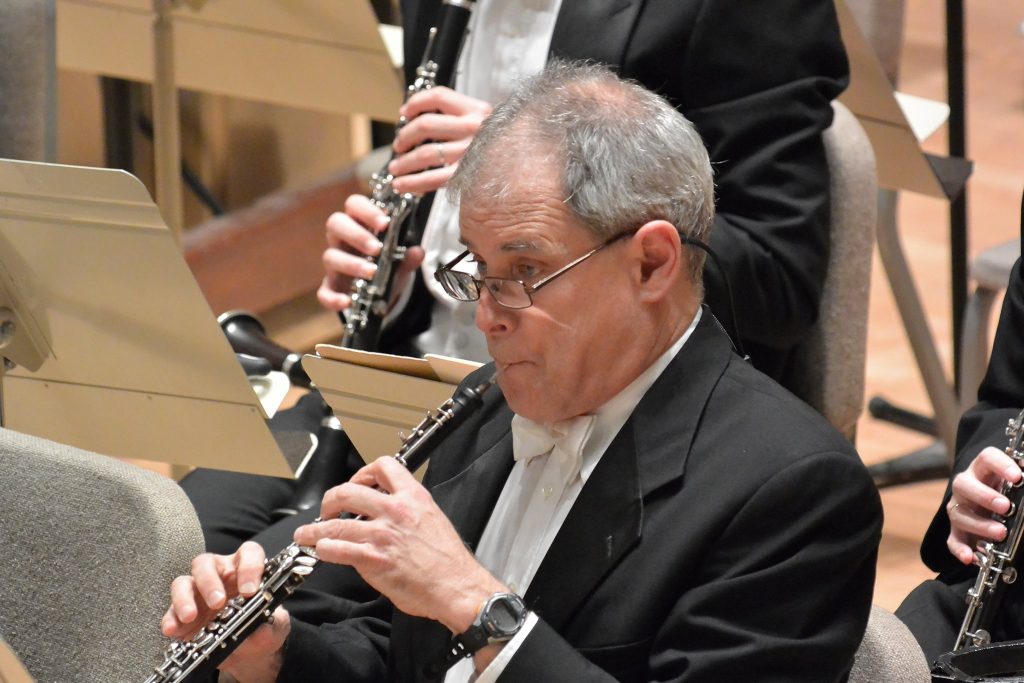 My teacher, Mr. Killmer was a student of Robert Bloom after establishing a career with a vary multifaceted education working in public schools and serving in the army. His undergraduate education was at Colorado State College (now the university of Northern Colorado) where he studied with William Gower. He also studied, remarkably, with Richard Henderson while they both played in the El Paso Symphony. Mr. Killmer would later teach Richard Henderson’s daughter Rebeccca Henderson who recorded one of my childhood favorite CD’s “is but a dream”, and was the professor at the University of Texas at Austin. His path to oboe stardom was winding and unconventional, and his students are often quite unlike the rest of the oboe tradition. I would consider his philosophies to be another fork in the oboe tradition of this continent.

Robert Bloom was one of Tabetau’s students who famously championed the Bach cantatas as essential repertoire. Among his most famous contemporary students were Ray Still, Mr. Killmer, Bob Atherholt, and Steven Taylor. 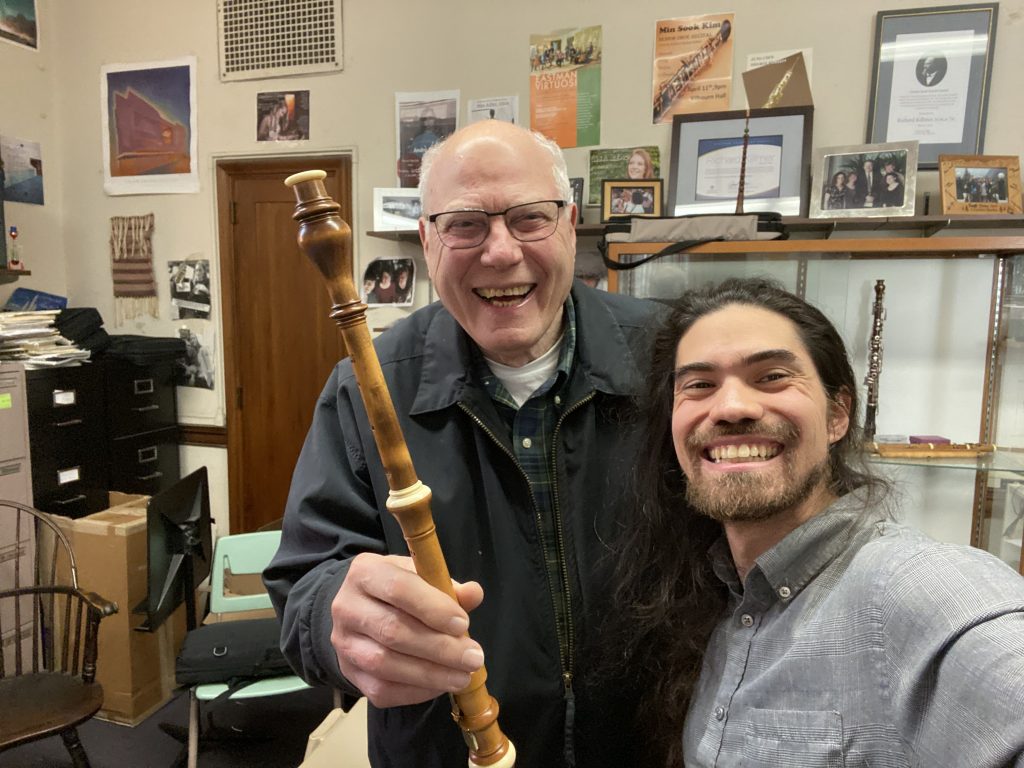 Julia Derosa is a product of Juilliard and a prolific broadway, and sypmonic oboist. Toyin is a famous chamber and new music oboist who studied with James Caldwell at Oberlin and later at the Manhattan School of Music but I could not discover with whom. If you know please let me know in the comments. Ryan was a student of Elaine Douvas, Nathan Hughs and Pedro Diaz at Juilliard and is the English Horn player for the NY Phil. A quick aside to say that Caldwell studied with John Delancie at Curtis so is another leaf on the Tabetau family tree.

Steve Taylor is a famous soloist and chamber musician who has taught many of the nations leading oboists. Legend has it that he as very close with Bob Atherholt (later down this list) while at Juilliard.

Michael was the assistant principal oboist of the Chicago symphony and studied with Ray Still. Ray still was one of the more famous of Robert Bloom’s Students, who in turn studied with Tabeteau.

Robert Walters is a prolific orchestral oboist and English Hornist and has educated many of the nations top oboists. John Mack has surprisingly not come up yet, but for a time it seemed that all the major orchestral oboists were his students.

Rice has been a powerhouse on the audition scene in the last 10 years. Students have often won jobs before graduation and there is a strong audition culture.

Nancy King is a famous competition winner and soloist who’s  concerto recordings have served as reference recordings for many a music student. She suffered a terrible car accident in the 80’s and famously relearned how to play the oboe to an extraordinarily high level. Many of her students have found success as university professors and working musicians in creative and impactful ways.

Linda Stroman has had a prolific teaching career and her students play in lots of the premier orchestras internationally. She has also been involved with the Juilliard School and Louisiana State University. She has forged strong relationships in the oboe community and her name comes up a lot no matter which generation of oboist you may be in conversation with.

He also worked with Lother Koch in Berlin on a Fulbright Fellowship and with oboists Fernand Gillet and Josef Marx. Alan Vogel is one of the few professors to have received a DMA from Yale. He is also unique in his education having had contact with the heavy hitters in Berlin who had a famously unique way of playing the oboe.

USC --and Marion Kuszyk; James Caldwell and Richard Killmer. This combination of teachers was shared by Rebecca Henderson and Erin Hannigan who teaches at SMU and plays principal oboe in the Dallas Symphony.

Peabody Conservatory- Nicholas Stoval; Cleveland Institute of Music and The Juilliard School as a student of John Mack, Elaine Douvas, and Nathan Hughes.

Jan has played every position in the Baltimore symphony and is a very active chamber musician.

Both teachers at San Francisco Conservatory have had very unique paths to success yet they share a very famous teacher who was most famous in the mid 20th century so unfortunately is beyond the scope of this list.

University of Colorado Boulder College of Music (Boulder, CO): Peter Cooper; Ray Still and Gladys Elliot, who was one of the first women to play in a major Symphony Orchestra in the mid twentieth century.

Peter Cooper played in Hong Kong before assuming the principal oboe position of the Colorado symphony.

Jason Lichtenwalter also teaches at CU Boulder and plays English Horn in the CSO. He studied with James Caldwell and Richard Killmer.

Cincinnati Conservatory of Music: Titus Underwood; has had a ton of education and degrees-

Underwood received his Master of Music from the Juilliard School, where he studied with Elaine Douvas, and completed additional studies with Nathan Hughes and Pedro Diaz. He earned his Bachelor of Music at the Cleveland Institute of Music where he studied with John Mack, Frank Rosenwein and Jeff Rathbun. In 2013, he received his Artist Diploma from the Colburn School with Allan Vogel. Additional teachers include Anne Marie Gabriele, Robert Atherholt and Joseph Robinson.

Frank Rosenwien also teaches through a residency at CU boulder.

Richard Killmer at Eastman and Yale, and Nancy Ambrose King at the University of Michigan.  His students have won principal jobs in Shanghi and smaller orchestras in the USA.

Sherry Sylar; Ray Still and Someone at Indiana?

David Walter who has trained many of the principal oboists of the world’s premier orchestras.

The biggest thing I learned is that there are tons of really fantastic oboe teachers in the USA. I have not even delved into where many famous full time oboists went to school. I love the oboe world and am excited to see where the next oboe superstars emerge from.

Testing an oboe reed – 4 tips to improve your oboe sanity!

How to break in an oboe reed