How to articulate on the oboe

Clarity of articulation is imperative for expressive music making, can prove to be a unique challenge on the oboe. The oboist must use the breath, tongue and embouchure in concert to produce notes from silence and to distinctly separate notes in various styles.

The basic process of producing a note begins with an articulation 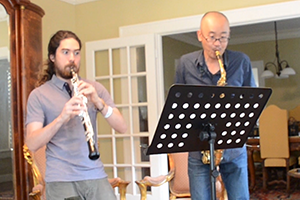 "The basic process of producing a note begins with an articulation..."

Your goal should be a pristine beginning of the note without extra trash in the sound. Each note should have a clear initiation, body, and release.

Many beginners,myself included,  believe that the tongue starts the note by pressing against the reed. I like so many others realized later that this is simply not the case.

The tongue needs to maintained higher for playing the oboe than for most other instruments this puts the tongue in position to touch(not strike) the reed  in a parallel motion by moving forward in the mouth. The tongue needs to be used for precise soft starts and can be controlled to change the severity of the attack.

Articulation Speed can be controlled by inventing an exercise of multiple note tonguing on each scale degree of a scale and increasing the metronome by a single click each repetition to exhaustion of the tongue muscle.  Regular maintenance is required to stay in shape. A good goal is 132 bpm or faster for sixteenth notes. Articulation speed may be handicapped by the tongue striking too hard or holding the tongue in an inappropriate position.

Articulation variation is as important as speed, and various syllables can be visualized and employed to add expression to the music.

The extrinsic  tongue muscles anchor deeper in the throat than most people believe. These muscles are skeletal muscles which means they can be worked out and strengthened like your bicep or your quads. Slow progressions are key for muscle development here. So be patient as you grow your color palette for single tongue articulations.

The most overlooked component of single tonguing is the airstream. By controlling the speed of the airstream players can more easily tongue at higher speeds and vary the firmness of the attack.

How I teach my beginners about tonging

Many teach beginners to aspirate the beginnings of notes. I teach articulation in the first few lessons because it is such a key indicator of good airstream speed. Once the student is able to produce the crow on the reed reliably they are ready to learn to articulate on the reed alone.

Reed alone exercises have become a staple of my teaching in the past few years and I am happy for that! My own tone has improved since I started practicing them daily.

Following the list above students slowly learn to habituate the process of first breathing in, then placing the tongue on the reed as the embouchure forms, then building up the pressure, and finally releasing the tongue.

When the long tone sounds good on the reed alone we move the same mantra and practice to long tones on the oboe.

This is much easier with a good reed. I sell reeds for students and pros in the shoppe which you can view by clicking here. 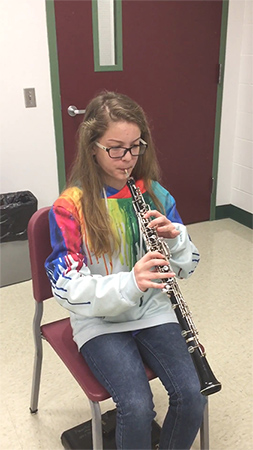 What part of the tongue is used?

Only the very tip of the tongue should be used to make contact with the tip of the reed. Additionally, the anchor muscles of the tongue must be strengthened to support the tongue when not articulating and to pull the tongue forward to strike the reed like a cobra and return to the original position.

How to get a super fast and clear single tongue

Once you understand the basics of single tonguing it is important to have a reliable single tongue at fast tempos especially if the double tongue is not yet developed. I have a video to the left which walks through all the strategies for developing a fast single tongue. I used these techniques to build a comfortable single tongue for sixteenth notes at 170 bpm.

Notice the key is to start with the reed alone and to vary the workout to create muscle confusion.

The first myth that needs to be dispelled is that the only way to develop a fast single tongue is to play the notes staccato. While a fast staccato articulation is very useful. Some musical passages will be more easily executed the desired fluidity and speed by using a legato style.

No matter the style of articulation the most important component is not the strength of the tongue but the consistency and direction of the air.

When practicing staccato tonguing it is important to gain control over the abdominal muscles in producing short bursts of faster air while maintaining a supported air column. This can be practiced on the reed alone by sustaining a long tone and saying a “Ha Ha Ha”  through the reed without dropping the tone. There should never be a break or silence in the tone. When this is easy to control coordinate the burst of air with the movement of the tongue to produce a neat staccato articulation. Slowly increase the tempo.

Eventually you should be able to produce the same articulation while playing on the instrument. Try on single notes and then scales and then eventually on Barret Melodic Study number 16.

Eventually the tempo will be too fast for staccato articulations to be useful. Excerpts like Mendelssohn’s Scotch symphony or   La Scala de Seta will require a clear but smooth articulation with plenty of air direction. To develop the clarity in your tonguing in this style the air stream needs to have direction and never drop in intensity or speed. In fact at times it may be necessary to increase the speed over time.

Practice the feeling of the tongue producing both the beginning and ending of the note by saying the syllable “tot, hot ,hot”  notice that the tongue only hits once as both the ending of one syllable and the beginning of the next. When this is easily controlled try performing it on the reed alone as before. It should be easier to increase the speed than when using staccato style because there is less to coordinate. Eventually you can incorporate this technique into single note bursts or scales or even the etudes and excerpts mentioned above. Above all else make sure you are having fun practicing and playing the oboe!

The tongue should never be used as a default for note endings. Stopping the notes with the tongue will result in an abrupt ending, which is to be avoided. As Mr. Killmer used to exclaim to me “No Square Notes!”.

Instead of using the tongue use the embouchure to balance the airstream as the top lip closes down over the tip of the reed.You may practice the muscles involved by singing and ending the sound with an “MMMMM” consonant.  Each note ending should be like a mini diminuendo.

The Barret book has a section on how to accomplish this and I have a downloadable etude which you can have for free by clicking here. Long tones are also useful for developing this crucial skill.

It is important to practice double a triple tonguing slowly over time. Set reasonable goals and work for clarity not speed. Speed will come along with daily practice and discipline. Practice the following excerpts painfully slowly one measure at a time until the articulation is a clear as if you were single tonguing.

Flutter tonguing is an extended technique that is not often called for but can really set great  players apart. To flutter tongue a roll must be created by the tongue against the hard palate of the roof of the mouth. When you can do this far back enough in the mouth you will then have room for the reed and be able to produce the sound through the oboe. It’s a bit difficult to explain with text so I have included a video tutorial to the left which I hope you find useful.

Another extended technique that is occasionally written is the aspirated attack. This is when the note begins without the aid of the tongue. It is important the airstream and voicing of the note be spot on so that no extra noise enters the beginning of the note.

Aspirated attacks are usually called for especially quiet or delicate sections and they must be practiced with this in mind. When executing,I find it is  better to undershoot the pressure and air speed because a delay in the sound is better than a squawk. As always when in doubt play beautifully, but sometimes it’s better to simply not be in doubt.

How can I avoid playing sharp on the oboe? And how to play in tune.

How to buy an Oboe: Background and 4-Step Guide