Certain pieces in the oboe repertoire demand careful study for any students wishing to pursue a professional career and Hummel’s concerto for oboe and orchestra is no exception. The piece is accessible through many different publishers but the one I prefer can be found here : https://www.amazon.com/Hummel-Introduction-Theme-Variations-Op/dp/B007MW00HC

The following is a brief guide students and performers may use to inform their study of the work and program notes they may wish to create for the audience. Please site OboeFiles.com if reprinting original text though. Be nice to your colleagues!

Form of the concerto

As is usual for Hummel the theme and variations sound very classical, but there are interesting departures from the standard theme and variation form of Mozart’s piano sonatas. The piece begins with a slow introduction much like Beethoven’s first 2 symphonies and many of Haydn’s. Then the theme is presented; a simple melody that evokes a certain coy innocence. The theme is in Binary form and performers often use the repeats to perform their own ornamented take on the theme, especially in the B section. The orchestra (or piano) has a section closing the theme and in between each variation which is crucial for the oboists to have a chance to rest and regain composure between the demanding variations. 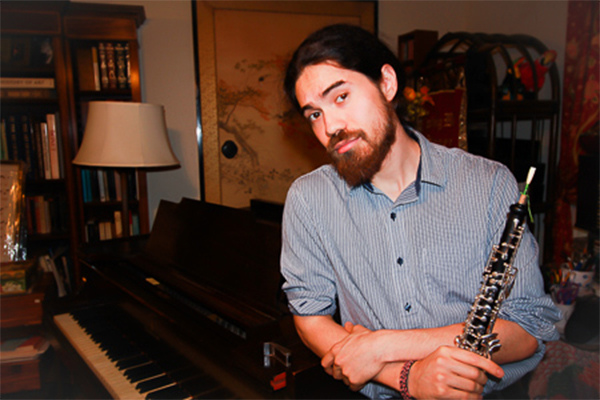 The second variation is quite slow and features prominent counter melodies from the Principal strings or piano in the A section, but at the beginning of the B section it is the oboe that becomes the counter melody. Understanding this relationship allows a more sensitive performance.

The oboe takes part in the following orchestra interlude. The following variation is quite flashy and the performer is advised to take care to preserve the classical style of articulation and phrasing.

The fourth variation is once again slow with an epic singing oboe line that is a real crowd pleaser that sounds straight out of a Mozart piano concerto.

The next variation is the development section which features a storm and thunder section that opens up into the cadenza. The winds of the orchestra get to trade solos here, notably flute and bassoon.

The cadenza leads right into a variation in triple meter which is really quite delightful. The next variation is a whirlwind of technique that leads into the coda where the oboe scales up to a high F and finishes the piece.

Who was Hummel? Hummel Biography

The classical period of western music served as a return to simplicity, elegance, and variety  from the ornate and single affect philosophies of the Baroque era. Johann Nepomuk Hummel is not one of the most famous heroes of the period but he serves as a link between many of the great figures of the German Classical legacy including Shubert, Mozart, Beethoven, and Haydn.

Hummel(1778-1837) was born in the Austrio-Hungarian Empire in what would become Slovakia. While his grandfather was a farmer his father was sent to study music and became a violinist. As a child Johann Hummel was obsesed with music and took his musical education very seriously from a young age; enthusiastically performing violin  on the street to much encouragement of his neighbors. This habit ended however when a classmate began to tease him and critique his playing awakening a rage in Johan to the point of attacking his critique with his violin. After this episode Hummel became a bit reclusive and devoted himself to the harpsichord and pianoForte.

His incredible talent and interest in music was recognized by his father,  who was then hired to work and teach in a school in Vienna, took Johann to visit Mozart and learn from the master. Mozart enthusiastically took Nepomuk on as a student after hearing him play, sight read, and improvise at the pianoForte under the condition that Mozart would house and care for Johann as his own son. For a little over a year from ages 10-11 Hummel was part of the Mozart household and was cared for and educated by Wolfgang and his wife. It was at this internship that Hummel must have come into contact with several great composers such as Haydn, who he would meet again in London,  and musical critics such as the famous Charles Burney. This legacy of being Mozart’s pupil would serve Hummels career or a lifetime.

As Hummel  grew to be a great performer he began touring across Europe, with the support of this father,  and he became well known as a pianist and acclaimed improvisor. While this practice may have been common for gifted child musicians of the time and parallels Mozart’s childhood, Hummel maintained an excellent relationship with his father in contrast. It was during a tour to London that he met Haydn who lavished praise onto the young Hummel. This meeting would forebode a close working association later in the life of both composers.

In adulthood Hummel composed many well received works such as his trumpet concerto,  piano trios, sacred works, works for solo piano, and many operas. While many delighted in his long phrases and Mozart like elegance, his style was criticised as being too of the “old school” and was often compared unfavorably to the innovations of Beethoven, with whom he had a complicated friendship. The legacy of being Mozart’s pupil proved to be a double edged sword.

Hummel had great reverence for Beethoven’s tallents and while they often had conflict they remained close until the end of Beethoven’s life. Beethoven often affectionately referred to Hummel and referred to him as a first rate improvisor. In one particular episode the young Schubert came to visit Beethoven and Hummel heard one of Schubert’s arias performed after which Hummel improvised a fantasy based on the melody of the aria to the delight of all present.

Hummel would later be employed by the prince of Esterhazy as Haydn’s assistant and would later replace the master after his death. Eventually domestic issues distracted Hummel from his post and he was dismissed in 1811 for neglecting his duties. He then moved to Stuttgart and later Weimar and worked many posts and as a freelance and entrepreneurial musician. This was his most productive period and it was in either of these cities that the Introduction, Theme and Variations for Oboe was produced.

Later in his life he established concert series and promoted instrumental music as a stand alone art form. He maintained working associations with Schumann and Paganini and be credited with advancing the movement to protect composer’s work in terms of copyright. When he died at age 54 he was renowned as a pianist often being compared to Lizt and Chopin. Though his compositions did not become mainstream after his death, recent recording and concert projects have reawoken public awareness of his art.

Working up the concerto

I have only seen this piece performed with orchestra once as part of the finals of the Ima Hogg Competition in Houston, but I have seen it performed as a recital piece with piano reduction and is in fact quite an effective solo piece. The melodies are beautifully lyrical and the technical sections are flashy and neat as one would expect from a student of Mozart.

There are  plenty of interesting twists and turns  in the variations as far as key and meter to keep the performer and audience engaged even after multiple performances. Nevertheless, the repeated sections allow for plenty of ornamentation by the performer and gives an opportunity to show off sensitivity and innovation. Some great oboists like Richard Killmer prefer the piece with minimal ornamentation while others like Alex Klein show off their tremendous technical ability in a modern Rococo flare. Most would probably agree that something in between is probably appropriate and most consistent with what Hummel would have expected the performer to add anyway.

When working on the concerto, be sure to begin the variations carefully, slowly, and intentionally. After listening to many recordings or performances you may have a good idea in your mind regarding what you would like the piece to sound like. Do not let your hands get away from you though and practice the technical sections slowly and carefully. Even the first variation in triplets is deceptively hard.

What is the Difference Between American and European Oboe Playing?

Why Are Oboes So Expensive!? And how to make them affordable

History of the Oboe