How long does an oboe reed last? and how to make it last longer

Oboe reeds are a constant struggle for students and professionals alike. The expense in both time and cash is simply a necessary cost of making music for double reed players. Whether you buy or make reeds, the longevity of the reed always seems far too short.

Oboe reeds last for about 10-15 hours of playing and usually no longer than one month after construction, though some reeds, un-played and kept in stable environments, may last longer . Changes in weather may shorten or extend a reed’s viability. Reeds will slowly lose their function over time, and replacing the reed is recommended every 2-3 weeks for intermediate players and every few days for advanced or professional players. No two reeds are alike, and each reed will have its own unique lifespan.

Life cycle of the oboe reed 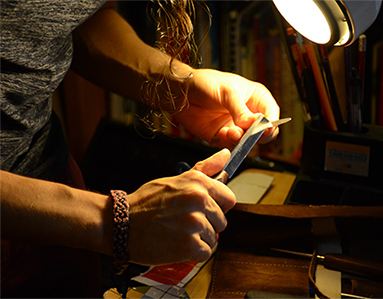 2.    Breaking the reed in – This step takes much less time on oboe reeds than on bassoon, clarinet, or saxophone reeds because the reedmaker has had to play the reed to test it during the construction process. The reed may need a few hours to settle into your playing after you purchase it, but don’t expect a reed to become a lot easier to play with time. A bad reed is a bad reed, and you’ll save a lot of time and heartache knowing when to move on from a less-than-savory reed.

3.   Golden age of playing – This is the prime of the reed’s short life, when the response, intonation, and tone are the best. This usually lasts anywhere from a few days to a couple weeks. Make sure you keep the reed safely in your case to air dry while not playing, and never touch the blades of the reed!

Some students will often lose track of their reed or walk around with the reed in the instrument which will accidentally bump into things or people.  The blades of the reed are delicate and should only ever touch your case or your mouth. You can further extend this period by following the tips described below for increasing a reed’s longevity.

4. Deterioration – As the reed ages, the blades will slip because the pressure of the thread will overcome the force provided by the overlapping blades. The blades will begin to slip past one another and the opening will become smaller, making the pitch of the reed rise. Additionally, if the reed has been happily played, there will be bacterial growth on the inside, forming biofilms that will hinder the vibrations of the blade and further alter the space of the chamber inside. It will soon be time to replace this reed. Be sure to safely extract the staple/cork without damaging it so you or your teacher can use it to make another reed. 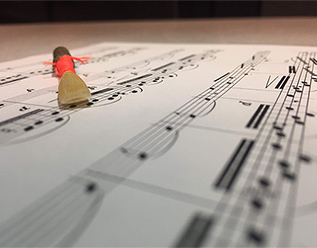 Quick hacks to keep your reed alive in an emergency!

1 .  If you need to keep your reed alive for an upcoming rehearsal or concert and you have no other options, you can use a round flat plaque to scrape the inside of each blade of the reed. Some of the white biofilm should come off of the blades and allow them to vibrate freely for a little longer. This trick compromises the structure of the reed and may raise the pitch, but it has saved me for several important rehearsals and bought me time to make a new reed.

2.   If the reed is simply too old but you do not know where to get a new one, you can use this last resort to breathe a few hours of life into the reed. Microwave a mug half full  of water in it for 1 minute. It is best if the water does not reach a boil but is quite hot. Then dip your reed into the hot water for 10-20 seconds. This will usually open the cane back up and wash away some debris. This sort of thing should only be used once to give you another day to get some new reeds.

How to make reeds last longer in 6 tips

Good reeds are hard to come by and it is a shame when they stop working their best. These daily habits can keep your reeds feeling great for longer.

Firstly, it helps to understand that the reed is made of grass. The species name is Arano Dorax, but it is mostly chains of densely packed plant cellulose covered by a layer of waxy bark. The cane has been dried out, which gives it more stability, but it also has lots of microscopic nooks and crannies that can collect moisture and debris while playing.

Understanding this will help to dispel the myth that your saliva breaks down the reed. Human saliva contains enzymes that can break down many chains of sugar, but cellulose is not one of them. This is why spinach does not taste sweet while pasta and fruits do. Many species of bacteria, however, love to break down cellulose, which is why fibrous greens are good for the health of your gut and the health of cows everywhere. Bacteria, not saliva, are the inevitable enemies of cane.

So, brush your teeth! Maintaining good oral hygiene is important, not just when you are about to play but as part of your daily routine. Oboists who maintain clean mouths will have reeds that last longer because they are not constantly colonizing the inside of the reed with bacteria. Toothpaste will also hinder vibrations, so make sure you are not just frantically brushing before you practice but regularly brushing and rinsing so there is not debris, alive or otherwise, flowing into your favorite reed. 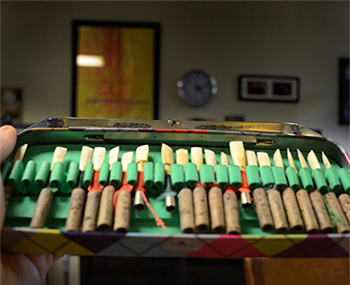 Having backup reeds is a must! Never be caught with just one reed. I recommend that students buy 3 reeds at a time and order new reeds every month.

Giving your reeds a chance to rest will allow the cane to adjust to environmental changes like humidity and air pressure. Often, cane on a freshly made reed has been compressed, and giving it a chance to re-expand will allow more precision with the reed knife as you refine the tip for a exquisitely dolce sound.

Even for students who buy their reeds, rotating the reeds is a good idea. While some people may disagree, I feel that giving the reed a chance to readjust for a day helps keep the reed from degrading so quickly.

Rotating your reeds also allows you to ensure that you don’t get attached to a favorite reed and will always have a backup in case any accidental physical damage should befall your reed.

3. Keep your reeds securely in a hard reed case

There are a lot of bad reed cases out there! Some even cost a lot, so be a savvy oboist and make sure your reeds are not moving around in your case while it is shut. Make sure the case closes securely and will not open unexpectedly while traveling.

The best reed cases are hand fitted and breathable – you can see one that I recommend by clicking here.

4. Soak your reeds in water, not your mouth

For many years, I soaked my reeds in my mouth, like a saxophonist. (I didn’t have an oboe teacher for many years as a kid.) When I switched over to soaking my reeds in water, my life changed! Soaking your reeds in water for a few minutes not only helps them play better, but also dramatically increases their life span. Once again, this is about microscopic life growing in your reed!

Make sure you use clean water each time you play, and avoid over-soaking your reed. John Mack advocated soaking the whole reed, thread and all, for a few minutes but not more, and I have heard Richard Killmer echo this sentiment. Over-soaked reeds will sound stodgy and may cause the blades to slip prematurely, which shortens the life of the reed.

5. Know where your reed is at all times!

So many reeds fall victim to carelessness each year at the hands of tearful middleschoolers who have not yet learned to be mindful of their delicate reeds. Just in case you are not rolling your eyes yet, here is a brief checklist for reed handling:

As players get older they tend to be better about carelessly destroying their reeds, but it is helpful to encourage older players to remind their younger colleagues that reeds are not cheap and that it is good to be mindful of them.

Good reeds will play better for longer. If you feel like your reeds are not playing well after just a day or two, it is possible that the cane was not very dense, or that you were over-compensating for some shortcoming of the reed and manipulating the blades into submission. It may be time to find a new source for reeds. You can see the reeds that I make for sale by clicking here.

Handmade reeds customized for you by your teacher are far superior to commercially made reeds from the local music store. You can see the difference in the structure by holding the reeds against the light, as in this photo. 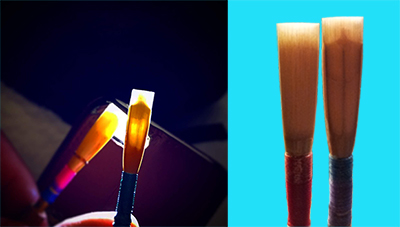 Notice the clear definition of the spine, tip, heart and windows on the hand made reed. The store bought reed is often very flat and hard to control because of this lack of structure.

When is it time for a new reed?

After playing on a reed for a few days or weeks, you will notice that the pitch has become hard to keep down or that the opening feels like it is collapsing. Soaking the reed in very warm water for longer can help keep the reed going for a few days, but this is only a temporary solution. The reed may also respond to soaking in hydrogen peroxide, but this is also only a temporary fix.

Eventually you will see the blades of the reed begin to slip past each other – from that point, there is no return. It is time to move on to the next reed. Following the above tips will allow you to avoid this trauma as much as possible. No matter whether your reed is old or new, remember to play beautifully.

When your reed dies

So many band directors and young students like to smash their old reeds against the wall or rip the cane off by twisting the blades with no attention to the thread. This will disfigure the staple below the thread and render it unusable or undesirable.

The staple can be reused many times, so it is worth taking the time to cut the thread off of a dead reed, or to just wait until your next lesson and let your teacher take care of the reclaiming of the staple. Many teachers even offer a discount on reeds for returned staples in good condition.

How to: high notes on the oboe (Fingerings and tips for the 2nd/3rd octave with video tutorial)

Choose the perfect music school for you in 5 easy steps