A Brief History of the Oboe

The oboe is a staple of Western art music and the most distinct solo sound in the orchestra, but cultures around the world have been using soprano double reed instruments for music production for millennia. During the era in naturalism in Europe in the 18th century, many in Europe began to take an interest in the history of the oboe and imagined a Eurocentric historical trajectory. Just like all technologies, historians of the time credited their culture to the Hellenistic societies in Greece and Rome.

The oboe has 3 main iterations in western music click on the menu below to jump between eras.

The Greek aulos (with two sounding tubes) and the Roman tibia (so named for its being made from the leg of a deer) are often supposed to have had a double reed for sound production, and while this is possible, they are most likely not the direct ancestor to the modern oboe. Instead, this position belongs to the zurna, which is of Middle Eastern origin and was eventually developed into the shwam, which was a staple instrument of medieval courts.

While the zurna (or zurnah) exists in many sizes, it is most commonly a conical bore soprano instrument with a flared bell and a double reed that either manipulated with the lips or taken entirely into the mouth, aided by a pirouette. Because the instrument has been documented in Arabic art and poetry since before the rapid Arabic expansion of the middle ages, it is thought that the instrument spread through Europe either by way of the Moors in Spain or with homebound crusaders. While the exact modifications transforming zurna to shawm to oboe are undocumented, studies based on etymology by Curt Sachs assert that the zurna’s other double reed descendants can be found all over the world, from the duduk of Romania and Georgia to the sarunai of Malaysia. 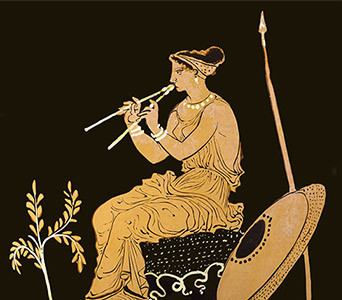 When translated to the many European languages, the zurna begins to sound more familiar to modern ears. The shawm (England), chirimía (Spain), and chalumeau (France) may have at one time described the same or very similar instruments, and these names refer to modern musical terms in other regional or traditional contexts today.

What is clear is that consorts of shawms were used to play for court music until the later part of the Elizabethan age, when more subtle consorts of instruments like violins or recorders were more appreciated. They “declined somewhat in dignity, and became limited to use to less refined grades of musical service…” (Bate 34). The were played outdoors for “fanfares when trumpets were not available” (Bates 35). While the rancorous nature of the shawms has become famous, there is a lot of evidence that by 1600, “playing with the reed on the lip for control was common” (Haynes 16). This would give the player more control of the tone and allow for more agreeable blending with other instruments. Nevertheless, Lully famously ejected all shawms, and other woodwinds from his ensembles, except for a new modified instrument: the hautboy.

In collaboration with Michel Philidor, Jean Hotteterre modified the shawm into what would become known as the hautboy for the Grand Ecurie of the court in Paris. Not much is known about the technical design of the instruments, save from what can be gathered from visual art like tapestries by LeBrun (1664), where they can be seen playing in consort and with other instruments for the coronation of King Louis XV. Ten hautboy players are included in the personnel lists for Lully’s “Vingt Quatr Violons”. 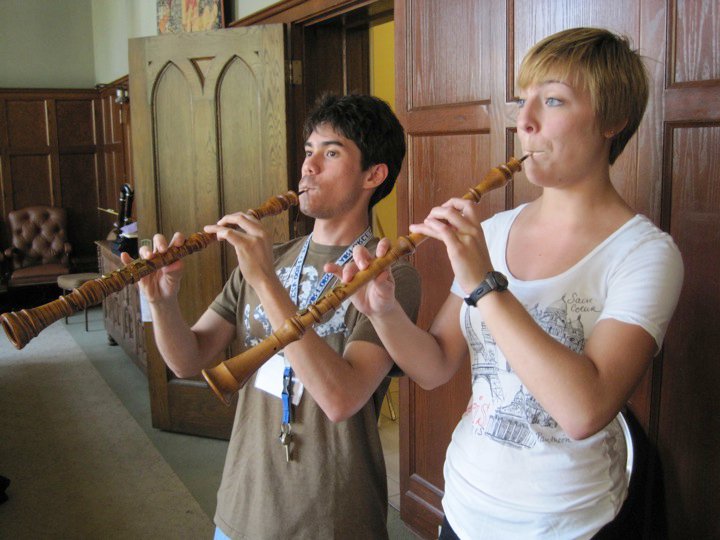 The hautboy continued to be modified by the Hotterere family; namely, Jean, his sons Jean and Martin, and his grandson Jacques “Le Romain”, who were also the vanguard players of the instrument. Dissemination of the hautboy throughout Europe during the Age of Enlightenment occurred because of the obsession of Royal courts with French fashion, and when French musicians visited other courts from London to Madrid to Vienna, the hautboy became the ultimate status symbol for the nobles to employ in their orchestra. Most hautboy players would double on a string instrument and could switch into the orchestra or the wind band as needed.

As the hautboy spread, local makers began copying and modifying the instrument, and local musicians started learning to play it. Players would frequently upgrade to new, state-of-the-art equipment, as hautboys were inexpensive in comparison to other instruments. Due to the instrument’s young history they were not seen as worth preserving, which leaves us with so few instruments of the era to study. The hautboy can be generally described as conical with a fairly wide bore and one or no keys. Slowly it became recognizable to us as the Baroque oboe.

Throughout the 17th century, different bore dimensions were standard depending on geography, and two keys were added to facilitate technique, as playing many notes on the oboe required cross fingerings and the E-flat was virtually impossible to produce without the aid of an additional key.

J.S. Bach and the oboe family

It is worth mentioning the influence of J.S. Bach on the development of the oboe. Bach wrote twice as many solos for the oboe as any other melodic instrument. He wrote mostly for Caspar Gleditsch, as they were both employed by the city of Leipzig. Gleditsch was very close to woodwind makers of the city and helped develop the oboe d’amore (alto oboe) and the oboe da caccia (tenor oboe), which fascinated Bach.

This alto oboe is seldom used in modern orchestras, and if it had not been for Felix Mendelssohn’s movement to revive the works of Bach it might not have been exposed to the expressionist composers who used it famously yet sparingly like Ravel and Debussy.  Even at its conception the oboe d’amore was a fad instrument, and while Telemann made it famous throughout Europe by writing concerti for the instrument, few composers have made use of it since. Bach’s cantatas and concerti makeup over 40% of the instrument’s repertoire.

The tenor oboe in F (also known as the taille oboe or the viola oboe) was already in use and functioned to fill out harmonies in the oboe bands and consorts for royal events. However, Bach preferred the oboe da caccia for the double reed tenor voice for its more mellow, expressive nature. The oboe da caccia is curved throughout the wooden body with an octagonal bore, like a coronet, and sheathed in leather. The bell flares out and is usually metal, like the hunting horns after which it is named.

This instrument would influence English horn construction for generations. 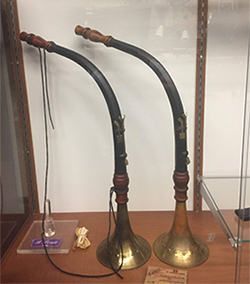 By the 18th century the bore was narrowed and the holes for the fingers were made smaller to create a brighter, more genteel and flexible sound. Around 1760 the design of the instrument began to standardize and the definitive classical oboe became ubiquitous in orchestras across Europe. The oboe continued to be played in consorts and military bands, but this gave way to the wind octet, for which sublime music was written by Beethoven and Mozart.

As the repertoire grew more complex and demanding, a “speaker key” was added to aid with the upper register and upward slurs. Harmonic fingerings and trill keys were often in use as well. Beethoven’s last symphony began to push the limits of the instrument, and the famous Czech virtuoso Joseph Selner began to find technical solutions to these issues.  “Using keys rather than cross fingerings to produce accidentals gave a crisper more specific tuning to these notes” (Burges 108).

Transitioning to the Modern Oboe

Throughout the 19th and early 20th centuries, oboe makers across Europe were experimenting with different key systems, though fingering charts of the era continued to describe oboes with only two keys. Influential oboists and designers of the modern oboe systems were Brod, Barret, Vogt, Véney, and others. Various mechanical solutions for extending the range down to low B-flat and trill fingers were tried as the industrial age allowed precision machinery to be copied onto many instruments in mass. While many forms gained regional popularity, the conservatory system of Triebert at the Paris Conservatory became the most popular system and consolidated the modern oboe to the form most recognizable today.

Among other key systems that gained some following, there were the thumplate system developed by Barret in England, and the German bore oboe designs. The thumbplate was embraced by many English oboists and is currently produced by the Haworth factory in London.  The much wider German Bore did not have such longevity and though it became popular for a time among the designs of Czech and German makers it eventually became virtually unused.

Oboe production in Germany was very decentralized, with slight variations in each region by preference, but two of the most notable are those of Henrich Pinder and Otto Mӧnning. Today Albrecht Meyer, principal oboe of the Berlin Philharmonic, plays on an oboe from the Mӧnning firm. Other experimental designs, including the spider key work and switches, were used briefly in Italy and Spain, but the market became virtually dominated by Triebert’s design. A notable exception is the Wiener oboe. 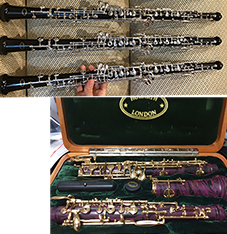 “The only oboe to withstand the international monopoly of the Conservatoire oboe, was a hybrid of Austrian and German models” (Burgges 176). Though there were/are some native makers like Koning that would supply this niche market, the largest current supplier of the Viennese oboe is Yamaha. 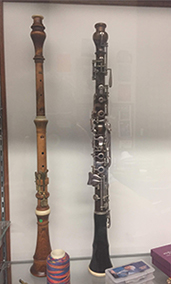 Ubiquity of the French oboe

In the rest of the German speaking nations, however, the German oboe was replaced by French designs. Strauss famously preferred the tone and flexibility of the French oboes. Furthermore, when Fritz Flemming (1973-1947) of Paris became the first French principal oboist of the Berlin Philharmonic, the French style of playing and instrument making was cemented into German musical life. German makers began to craft and sell French oboes. Exceptionally, the German oboe continued to be made and played only in East Germany and the USSR until the collapse of the soviet union.

While the history and modernization of the oboe is far more intricate and nuanced than can be discussed in this brief overview, the above discussion should serve as a topical guide to the incredible history of the oboe.

Bate, Phillip. The Oboe, An outline of its History Development and Construction. London/Ernest   Benn Limited. Toronto,1975.

How to teach articulation and tone for the oboe- Contrasting features of the pedagogical writings of professors that begin with the letter S:Sprenkle, Schaeferdiek, and Schurring

Want to be a College Music Major? 15 Things you Should do